This past June, Sigma Delta Tau announced its National Award Winners for the 2015-2016 academic year, with 16 chapter awards given out to over 25 chapters. All of the hard work from these chapters certainly paid off, and they are setting the example of what it means to be a Sig Delt to chapters across the country. Here, a few of the recognized chapters weigh in on what contributed to their success, what they have planned for the future and much more.

Our Alpha chapter at Cornell University was recognized for three awards this year, including Diamond Chapter. Chapter President Olivia Foster says, “To earn the Diamond Chapter award, my chapter increased our focus on philanthropy, safety and sisterhood.” Foster states that in addition to raising money and awareness for Prevent Child Abuse America and Jewish Women International, her chapter also raised $25,000 for Relay For Life. After Cornell University’s President, Elizabeth Garrett, passed away due to colon cancer, the chapter was moved to do as much as possible to contribute to cancer research. Foster attended SDT’s Leadership School and was inspired by the fact that, though it’s easy to get caught up in small stresses during college, she’s a part of something bigger. “Sigma Delta Tau is an amazing and extensive organization that creates connections beyond individual chapter sisterhood,” she says.

Gamma Xi at Montclair State University was one of six chapters recognized for philanthropic efforts for PCAA. Gianna Mazzone, who coordinated Gamma Xi’s 16th annual Tricky Tray this past year, raising over $28,000, says that efforts both big and small contributed to the chapter’s success. Mazzone says that one event she would recommend to other chapters is ‘Battle of the BeSDT,’ a dance competition including all groups, organizations and students on campus. “This event was so much fun because it was very interactive with other organizations on campus,” she says. “Additionally it raised money for PCAA and allowed us to spread awareness to the guests in attendance.” Mazzone says that nothing is more rewarding than running into a Sig Delt sister and instantly being able to connect to one another.

Gamma Eta at University of South Florida was recognized for three awards this year, including Diamond Chapter and Jewish Women International Fundraising. VP of Recruitment, Lily Hernandez, says that one successful event the chapter puts on each year to benefit JWI is The Flower Project. Every Wednesday in April, the sisters set up a table near the student center and sell flower pens to raise money and awareness, and to give mothers in JWI-sponsored shelters a gift for Mother’s Day. Hernandez says that her chapter has a lot to look forward to this school year, including spirit week, recruitment and an event for PCAA called Putting On The Hits, which raised $60,000 last year. Pennsylvania State University is known for its annual THON fundraiser, for which our Phi chapter helped contribute over $137,000 with their fraternity partner, Delta Sigma Phi, this past year. The event, the largest student-run philanthropy in the world consisting of yearlong fundraising and ending with a 46-hour dance marathon in February, raised over $9.77 million for the fight against pediatric cancer. In addition to canning weekends, the chapter held events including trunk shows, grilled cheese sales and a Parents Weekend. Chapter President, Anna Kirschner says, “Through my experiences as President and THON Chair, I let my love for the sorority and the cause motivate me to do my best, benefitting myself and others.” Kirschner says that a special quality of her chapter is that sisters are immersed in Penn State campus-wide, taking advantage of campus involvement as much as possible. The Beta Rho chapter at University of Virginia received the Community Service award for the second year in a row by having a strong dedication and desire from sisters to give back and help the community. The chapter holds many events, their most notable being Sig Delt Gives Back week, during which sisters volunteer throughout the Charlottesville and UVA communities. Community Service Chair Olivia Henderson says, “Receiving this award has validated our gains in community service and has inspired us to continue to develop our program to help even more people in our community.”

Gamma Pi Chapter President, Emily Crosmer, says that the University of Tampa chapter participates in events that allow them to excel in a variety of ways among SDT and their campus. This past spring, the chapter hosted a scholarship banquet to recognize sisters for their academic achievements, and invited professors to honor them for doing what they do. An event the chapter hosts called ‘Be the BeSDT You’ encourages women to empower themselves and each other. Crosmer says of the chapter’s successes, “I think learning to let go of trying to reach perfection, but rather striving to become better really helps keep everyone’s morale at its best and improve mentality. Alpha Theta at University of Maryland earned four national awards this year, including Diamond Chapter. Amanda Paull, Vice President of New Member Education and Vice President of Administration, says that the main goal for her and the other new member educator, Kirby, was sisterhood. Paull says that one amazing New Member event they loved was the Instagram program. She says, “We opened it up to the whole chapter, and we had an in-depth discussion about the self-confidence that stems from social media as a whole, and why we are more important than the number of likes on a photo.” Paull says that through her time in SDT, she has become a better friend, daughter, sister, student and person; she even gained a new lifelong friend in her fellow new member educator, Kirby

One of our newest chapters, Delta Nu at Stevens Institute of Technology, was recognized for their incredible bond and sisterhood programming. Vice President Tori Taibe says she loves the diversity in her chapter. “Our sisters can step outside their comfort zones and be who they are because you don’t have to fit a particular mold,” she says. “Delta Nu is made to stand out.” One influential position on the general board is the Sisterhood Chair, which was run this past year by founding member Brianna Marchal. One sisterhood event that the chapter loved was an etiquette and protocol seminar hosted by Cindy Grasso from the Charleston School of Protocol. “We learned so much and were able to take away priceless tips that we were able to apply to our daily lives,” says Taibe, noting that she suggests an event like this to all chapters. 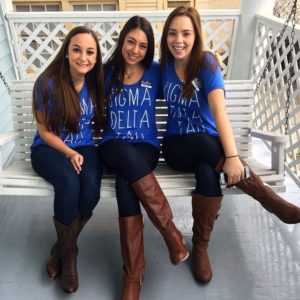 The Alpha Iota chapter at Tulane University extended 86 bids during 2016 Formal Spring Recruitment, bringing their chapter to 194 active members, making them the largest chapter of SDT. Marlee Michelson, chapter president, notes that overall this was one of their most successful years in terms of actives enjoying recruitment, as well as numbers and statistics of Potential New Members that came back to their house each day. Michelson says, “The most important aspect of recruitment is the quality of conversations between the actives and PNMs.” Michelson is excited to incorporate SDT’s upcoming Centennial Celebration into a variety of their chapter functions for this coming school year.

Our Beta Pi chapter at the University of Rochester received the Outstanding Alumnae Programming Award for their many great alumnae events. Erinmarie Byrnes, past chapter Secretary and a member of the 2015-2016 Collegiate Leadership Team, says that the chapter’s most notable Alumnae-related event is their Alumnae Tea, during which they host alumnae and their families during the school’s homecoming weekend. The chapter also has an Alumnae LinkedIn page, a Facebook group and a mentoring program featuring a Google spread sheet with contact information for alumnae in different professional fields within the chapter. Executive Vice President Genevieve Caldwell says, she would describe her chapter as empowered. “We are a strong group of individuals who aren’t afraid to share our thoughts and opinions,” she says. Victoria Visco, President of the Delta Zeta chapter at Rutgers University-Camden, remarks that it’s such a rewarding feeling to be recognized nationally, saying “we know that this is just the beginning and that we are on the up.” Visco says that this year, they plan to further their programming to educate more students on campus. Visco describes Sigma Delta Tau as powerful. “Who wouldn’t want to be a part of an organization who constantly strives for excellence, who is made up of strong women who let their voices be heard, who only wants to better her sisters as well as herself?” she says. “What a powerful and empowering group of women.”