Have you ever wondered if the memories you made in college would somehow linger? Or, what traditions may be carried on after you leave? For Donna Katz Reisman, Alpha Upsilon-Bradley, who graduated in 1990, she found a surprising connection to her legacy during a chance visit to her chapter.

Donna was visiting her son at Bradley University. She met several parents and talked about their students. One of the parents mentioned that her daughter was an SDT and Donna proudly exclaimed, “I am a member of the same chapter, albeit 25 years ago.” After talking and sharing stories about what things were like more than 20 years ago, all that reminiscing encouraged her to make an impromptu visit to the SDT house.

Donna was warmly welcomed by the chapter, “and ambushed in a positive way with questions about my experiences, the year I graduated, where I lived, what the house looked like, and what family I was in.”  Donna was a bit stumped on that last one. One of the women explained that all families had names, like “Princesses” and “The Noses” to connect the big/little lineages. Donna explained they didn’t have family names back her day, but was curious about “The Noses.”

One of the sisters explained that “The Noses” was one of the biggest families in the house. They have a signature post whereby each Big Sister places her index finger on the nose of the Little Sister.  “I almost fainted,” said Donna. “I asked if they knew why they adopted such a post, but no one knew.” One of the sisters took Donna to her room to show several photos of large groups of women, all with their index fingers on the nose of the girl next to her. Donna continued, “I was quivering with disbelief and delight, and once I composed myself, I explained that I believed I was the founder of ‘The Noses.’ I felt like a celebrity!”

Back in 1988 or early 1989, Donna said she had taken a picture with her pledge daughter (we now call them Little Sisters), Maureen “Renee” Stolman, and was being silly so put her finger on Maureen’s nose because she had been commenting on what a cute nose she had. During Donna’s remaining years, members of her lineage continued to take pictures with that pose. Little did they know that silly moment would turn out to be a big tradition for Alpha Upsilon, one that has continued for more than 25 years!

“Never in a million years could I have imagined that I would leave a legacy that would continue for generations to come,” said Donna. “I left my mark, and in addition to the pride I still feel, I’m amused by the fact that dozens of girls have been unwittingly posting with their fingers on one another’s noses and not having a clue as to why. I am smiling on so many levels.” 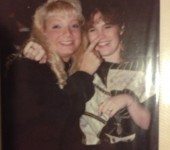 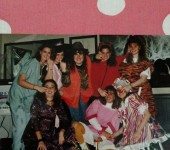 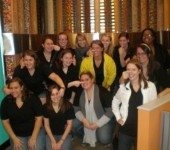